The USA’s electronic attack fighters are a unique, overworked, and nearly obsolete capability. With the retirement of the US Air Force’s long-range EF-111 Raven “Spark ‘Vark,” the aging 4-seat EA-6B Prowlers became the USA’s only remaining fighter for radar jamming, communications jamming and information operations like signals interception [1]. Despite their age and performance limits, they’ve been predictably busy on the front lines, used for everything from escorting strike aircraft against heavily defended targets, to disrupting enemy IED land mine attacks by jamming all radio signals in an area.

All airframes have lifespan limits, however, and the EA-6B is no exception. The USA’s new electronic warfare aircraft will be based on Boeing’s 2-seat F/A-18F Super Hornet multi-role fighter, and has 90% commonality with its counterpart. That will give it decent self-defense capabilities, as well as electronic attack potential. At present, however, the EA-18G is slated to be the only dedicated electronic warfare aircraft in the USA’s future force. 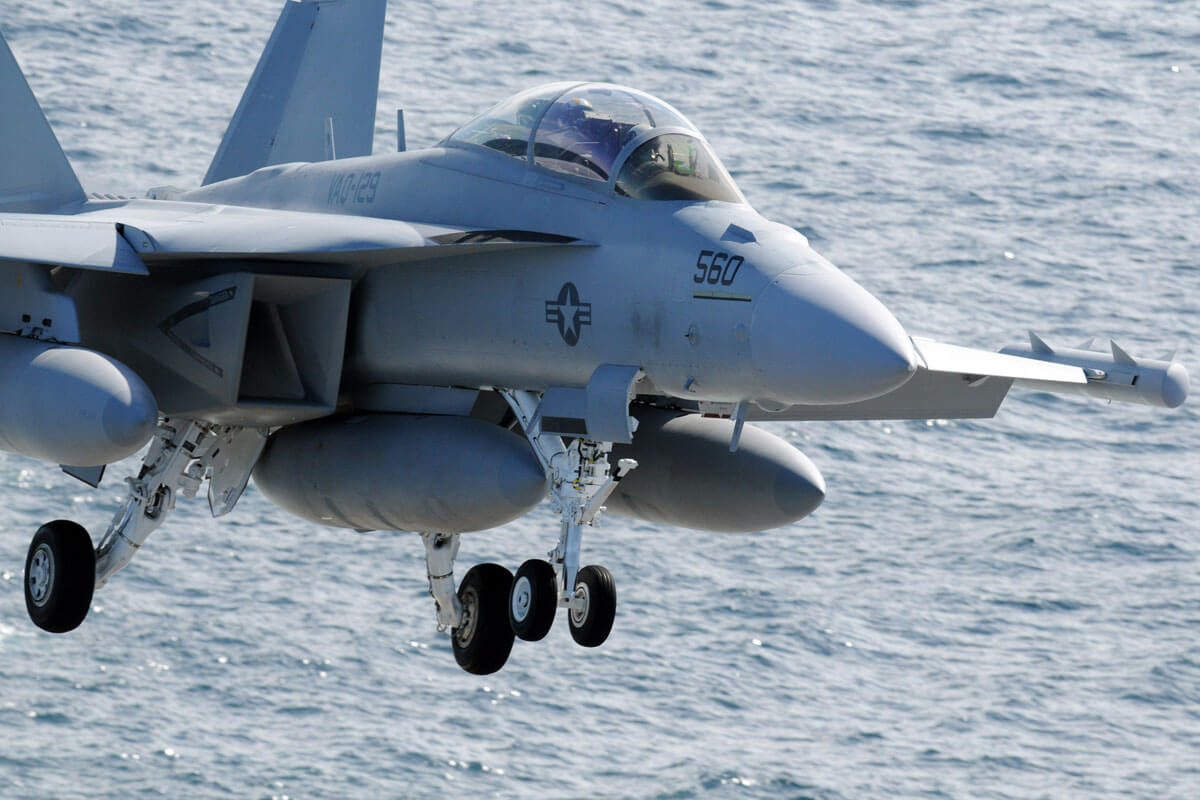 Appendix A: The EA-18G and the Future Force Mix

April 1/20: BRU-32 The US Navyawarded Marvin Engineering a $25.3 millionmodification to procure 428 F/A-18 E/FSuper Hornet andEA-18G BRU-32 ejector bomb racks for the Navy and thegovernment of Kuwait. The BRU-32 bomb rack is a gasoperated ejector rack with dual ejector pistons. Itweighs 76 pounds, incorporate 14- and 30-inch suspensionhooks and can accommodate single stores or multiplecarriage racks. The bomb rack features an electrical fuzesafety interlock, automatic sway bracing and storesensing switches. Work will take place in Inglewood,California. Expected completion will be by July2023.
February 27/20: Model Kits Boeing won a$7.4 milliondelivery order, which procures 30 A1 G-Model kits and66 A3 E-Model kits in support ofF/A-18E/F andEA-18G modifications. The US Navy F/A-18 E and FSuper Hornet is a maritime strike attack aircraft. Thefirst low-rate initial production aircraft was deliveredin December 1998, and all 12 of the first batch weredelivered by November 1999. EA-18G Growler is an airborneelectronic attack aircraft, which operates from either anaircraft carrier or from land-bases. The Growler wasdeveloped as a replacement for the United States NavyEA-6B Prowler aircraft that entered service in 1971 andis approaching the end of operational life. Work willtake place in California,Missouri and Texas. Estimatedcompletion is in October 2023.
December 20/19: Engineering ServicesBoeing Aerospace Operations won a $92.3 millioncontract action, which provides engineering technicalservices in support of Naval Aviation weapon systems andall associated systems and equipment throughout theirsustainment life-cycle, to include contractor fieldservices in support of theAV-8B Harrier II,EA-18G Growler,F/A-18 Super Hornet,C-40 Clipper, andP-8A Poseidon aircraft for the US Navy and thegovernment of Kuwait. In March Boeing was awarded$87.5 million to maintain the AV-B8 Harrier trainers forKuwait. In 2017 the contractor received $41 million forupgrades of the AV-B8 and the F/A-18. Work on thecontract will be performed at various locations in theUnited States as well as Kuwait and Iwakuni, Japan and isexpected to complete by December 2024.
November 25/19: Distributed TargetingProcessor-Network The US Navyawarded Boeing a $24.1 million delivery order, whichexercises the option to procure 34 Group A-1 retrofitkits, 34 Group A-2 retrofit kits, and 34 Group B retrofitkits for incorporation of the Distributed TargetingProcessor-Network into theEA-18G aircraft for the Navy. The EA-18G Growlerelectronic attack aircraft, a derivative of the F/A-18Super Hornet fighter, is manufactured by Boeing. Theaircraft is intended to provide tactical jammingcapabilities and protection to Australian ground, air andsea forces against enemy electronic warfare systems. TheEA-18G Growler measures 18.3m-long and 4.9m-high andfeatures large wings with a span of 13.7m. Its empennageconsists of a horizontal stabilizer and two verticaltailfins that are canted outward. The aircraftaccommodates two crew members in tandem seatconfiguration with pilot in front and electronic warfareofficer at rear. Boeing will perform work in Missouri,California and Washington. Estimated completion date isin June 2022.
September 10/19: First Images of NGJ-MBRaytheonpublished the first images of the Next-GenerationJammer Mid-Band on theEA-18 Growler. According to the company the NGJ-MB isa high-capacity and high-power airborne electronic attackweapon system. It will protect Air Forces by denying,degrading and disrupting threat radars and communicationdevices. InJuly, the jamming pod was the first of 15 EMD pods tobe delivered to the USN for mission systems testing andqualification on the Boeing EA-18G Growler, the service’scarrier-based electronic warfare aircraft.
August 28/19: Kuwait The US Navycontracted Physical Optics Corp. with a $27.2 millioncontract modification in support of theSuper Hornet andGrowler aircraft for the Navy and the government ofKuwait. The deal exercises an option for datatransfer unit production support, 160 data transferunits, 160 ground data transfer units, 14 maintenanceaccess cables, 600 mission data transfer devices, and 459maintenance data transfer devices in support of theNavy’s F/A-18 E/F and EA-18G program. In addition, thisoption exercise procures 37 data transfer units, 35ground data transfer units, 11 maintenance access cables,122 mission data transfer devices, and 90 maintenancedata transfer devices in support of the Kuwait SuperHornet program. Boeing Super Hornets aretwin-engine, carrier-capable, multirole fighter aircraftvariants based on the McDonnell DouglasF/A-18 Hornet. The EA-18G Growler is based on theSuper Hornet airframe. It is an electronic attackaircraft, which is capable of disrupting, deceiving ordenying a broad range of military electronic systems,including radars and communications. Work under thecontract modification will take place in California andestimated completion is in August 2021.
May 29/19: Block II Upgrade The US Navykicked off the Block 2 upgrade for the EA-18G Growleraircraft.Jane’s reports, that the USN issued a request forinformation in late May, in which it announced theintention to procure non-recurring engineering in supportofEA-18G Growler Block 2, including Electronic AttackUnit Surrogate Processor,AN/ALQ-218(V)4 RF receiver system, andAN/ALQ-227(V)2 communication countermeasures. TheGrowler is a variant of Boeing’s F-18FSuper Hornet. The aircraft provides tactical jammingand electronic protection to the carrier air wing. TheNavy will have its existing Growler fleet brought in forthe Block II upgrades, which will incorporate new sensorsand some of the Super Hornet Block III upgrades – likeconformal fuel tanks. The Growler’s sensors upgrades willdo some of the analysis work previously done by pilots,enabling the pilots to process data moreefficiently.
March 8/19: ALQ-249 The US Naval WarfareCenter Weapons Divisionawarded Raytheon a $12.2 million for engineering testsupport services for the ALQ-249 Next Generation Jammer(NGJ) currently in development for the Navy EA-18Gaircraft. The US Navy selected Raytheon’s ALQ-249 in 2013to replace ALQ-99 systems used on the EA-18G airborneelectronic attack aircraft. The Boeing EA-18G Growler isa carrier-based electronic warfare aircraft that enteredoperational service in 2009. TheGrowler is able to perform escort jamming as well asthe traditional standoff jamming mission. Servicesprovided under the contract include software support forNGJ pod and integration, including requirements analysis,design, development, integration, testing, training, andtools related to and in support of ALQ-249 and advancedelectronic warfare initiatives. Work will take place inCalifornia and is expected to conclude in March2024.
February 22/19: EW Drone The US Navyplans to test its newelectronic warfare (EW) drone this fall. The dronesare part of the „Remedy“ program by the Navy and NorthropGrumman that sees a small Class II unmanned aerialvehicle (UAV) packed into a cluster munition canisterthat would then eject from a mothership and fly aprogrammed route ahead of stand-off jammers and strikeaircraft. This could mean that electronic EW platformslike theEA-18G Growler could soon release swarms of dronesfrom the aircraft, allowing the smaller vehicles to flyahead to scout out for radar and other battlefieldemitters. The drones could even take part in electronicattack missions themselves by jamming enemy sensornetworks. During the trials in fall, Northrop Grummanplans to link the drone with an actual Growler as part ofFleet Tactical Grid 2019.

February 13/19: Sensor system UpgradeThe Naval Warfare Center Weapons Divisionawarded Raytheon a $88.4 million contract for themodification and upgrade of the sensor system softwareand hardware of the F/A-18E/F Super Hornet andEA-18G Growler aircraft to incorporate updates,improvements, and enhancements of tactical capabilities.The deal includes technical support for hardware andsoftware anomaly investigation, design, development,documentation, integration, test, and evaluation ofsystems and support equipment. The Boeing F/A-18E/F SuperHornet are twin-engine, carrier-capable, multirolefighter based on the McDonnell Douglas F/A-18 Hornet. TheSuper Hornet is able to carry air-to-air missiles andair-to-surface weapons. The Growler is a specializedversion of the Super Hornet. It is a carrier-basedelectronic warfare aircraft with the ability to performescort jamming as well as the traditional standoffjamming mission. Work under the contract will take placein El Segundo, California and is scheduled to be finishedby February 2024.

This menubar app for OS X will notify you via Notification Center (or Growl) when various security events occur (see list).

It's extremely lightweight, the app is 3MB including the icon, with <0.01% CPU and <15MB of RAM used when running.It's easily extensible in Python, you can add parsers that detect new TCP connetions or poll logfiles.You can even forward alerts as push notifications to your iOS devices using Prowl.

Alert you of attempted and succesfull SSH logins:

Notify you whenever a command is run with sudo:

Let you know when you're being portscanned:

The currently working alert types are:

I was tired of not being able to find an app that would quell my paranoia about open ports, so I made one myself. Now I can relax whenever I'm in a seedy internet cafe or connected to free Boingo airport wifi because I know if anyone is trying to connect to my computer.

Little Snitch is still hands-down the best connection-alerting software available for Mac, I highly suggest you check it out if you want a comprehensive firewall/alerting system, and are willing to pay a few bucks to get it. Security Growler is centered around parsing logfiles for any kind of generic pattern, not just monitoring the TCP connection table like Little Snitch. For example, my app can alert you of sudo events, keychain auth events, and anything else you can think of that's reported to a logfile. This app is significantly more lightweight than Little Snitch, it comes in at <15mb of RAM used, simply because it aims to solve a simpler problem than Little Snitch. This app is not designed to prevent malicious connections, that's what firewalls are for, it's just meant to keep an unobtrusive log, and alert you whenever important security events are happening. The more informed you are, the better you can protect yourself.

This app is meant for developers who frequenly run services that are open to their LAN, and just want to keep tabs on usage to make sure they aren't being abused by some local script kiddie. Since the target audience is developers, I opted to leave some parts a little less user-friendly, such as the settings.py config system.

Feel free to submit a pull-request and add a new parser (e.g. try writing one for nginx http-auth)!

A similar project written by @benjojo is available for Linux users: PushAlotAuth, it uses the PushALot push-notification platform.