This review only relates to MacBook Pro machines which have dual display adapters fitted. I’m not entirely sure which set of MBPs that is, except that mine is one of those with a 9400M/9600GT fitted. For years I’ve done various things on it from time to time such as writing an email and then deciding I want to play Eve Online for a while (or WarZone 2100) and then finishing up and coming back to browsing the web. Of course under standard OSX one must logout in between these different usage scenarios if one wants to take advantage of the higher graphics performance of the 9600GT for the games but like the idea of a bit of battery life if you should decide to take the machine off the wall for a while. 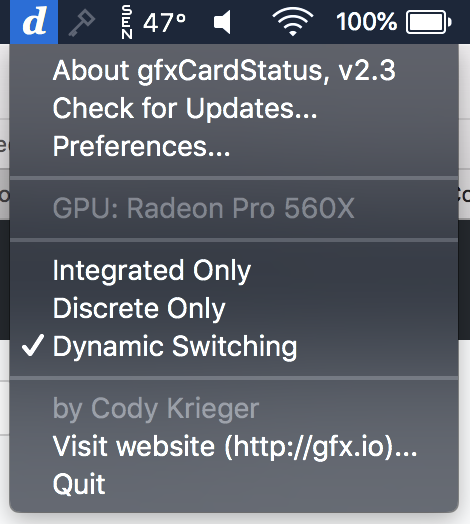 MacBook Pro（2016） を購入した人を筆頭に、 独立GPUを搭載した15インチ型 MacBook Pro の電池持ちを伸ばしたい という人は「 gfxcardstatus 」というアプリをインストールしましょう！. 「gfxCardStatus」は昔からある GPUを手動で制御することができるアプリケーション 。. GfxCardStatus is a small menu extra that displays which graphics card is the active one. When the system's computing demands change and the GPU is switched, this utility will show the switches in.

Enter gfxCardStatus by Cody Krieger. This nifty little utility does what everyone expected OSX should do for you. It provides the ability to switch between the 9400M or the 9600GT, without logging out, without having to close any of your apps and without losing your workflow. Where were Apple? This is something that should have been provided as a standard feature – but fortunately Cody Krieger has rescued us.

I can’t tell you how great this little application is. It’s simple to install (as most OSX apps are of course) and it does exactly what it says it will, flawlessly on my MacBook Pro. It provides a little menu item up the top of the screen which shows an i for the internal video card (in my case the 9400M – in the case of newer MacBooks I’m led to believe this is an Intel chipset video card?) which when you click it, you get a menu that looks like the one on the right. Pressing the Switch GPUs option will turn your screen blue for a few moments while Cody works his magic and then everything will come back as it was and the menu will now show a small d in place of the i. (I assume that’s for ‘discreet graphics’?).

The preferences screen couldn’t be simpler, but gives you just enough power to do what you need. Power being the operative word here and this again is something that I’m amazed Apple didn’t just build into OSX. Perhaps they were too lazy. I digress, power – with gfxCardStatus you can finally tell your MacBook Pro to run the low power (and less speedy) card when on battery, and the full screaming, juice sucking guzzler when on the wall. Perfect!

If I had to fault the app, the only thing I’d like it to be able to do is hotkey the GPU switching – but really, that’s such a minor issue I’m not going to let it detract me from the overall score of 5/5 for the app.

One feature that would be awesome – though I doubt it’d ever come to pass, would be to be able to set which GPU would be used for certain applications. For example, in my usage scenarios, I just about always want to use the 9400M, except when I’m playing Eve Online or WarZone 2100. If there was a way to automatically switch to the 9600 when I click their icon to start them, that’d just about be the sauce on the awesomeness that is gfxCardStatus.

Our Score, 10 out of 10 for this application – if you’ve a Mac with multiple graphics cards, this is an absolute must have application.

0(0 votes)
I am seeing different performance results when running a WinXP SP3 VM inside a Mac OS 10.6.5 host.. using VirtualBox 3.2.12.. depending on whether I boot the VM using Intel graphics, or nVidia graphics (using a 2010 MBP). In case you're unfamiliar, Apple made these laptops with ability to switch between integrated Intel graphics or the onboard nVidia graphics hardware..

I'm not sure if this is a problem with gfxCardStatus v1.8.1 (a small OS X program used to switch between graphics hardwares) or Virtualbox necessarily, but when I boot the VM using Intel graphics, and load up an old game inside WinXP, I get very poor frame rates.. around 20fps or so.. within that same boot of the VM, if I switch my graphics hardware through the host OS (with gfxCardStatus) to nVidia, I still see poor results.. low frame rates around the same speed..

However, if I boot the XP VM with nVidia graphics, I get excellent performance under nVidia hardware (game framerate is >100).. switching to Intel graphics makes performance drop (framerates around 30~40).. under this scenario (booted with nVidia), the VM behaves how I would expect.. it is able to make use of the hardware switch.. switching back and forth between nVidia and Intel gives repeatable expected results..
So the VM can handle the actual switching events between graphics hardware just fine.. but it's like it can't see the nVidia hardware if the guest OS isn't booted with it running..
Any thoughts / ideas?? Perhaps this a bug? Or maybe it's a limitation of WinXP during the boot or something?