Aria Maestosa is a great software for those interested in a complete and professional use of their midi files but without having to pay licensing costs. Yes, Aria Maestosa is a MIDI editor and sequencer available free and open source under GPL license.

It is characterized by a very practical and intuitive GUI, and allows you to compose, edit and play midi files through an approach very smooth and slender.

Aria Maestosa is available for the most popular operating systems: Mac, Linux and Windows. Any difficulties are reported only for XP users, but can be easily fixed by reading this article.

The software is also affected by a good community that works not only for the development and improvement of the program but also takes care of the translations into other languages. At the moment Aria Maestosa is available in English, French and Czech language. Everyone can participate in the translation project simply going to this page, which explains the projects that are already closed and those still in progress.

Even the handbook is affected by the same work (currently available in English, French, Greek and Serbian/Croatian). I have made a pdf version of the manual, that you can see in html version directly on the official website at this link.

The main features of this midi sequencer can be summarized as follows:

If you want to get an idea of how the software is, you can see a video recorded and uploaded from a home user. It is not very well made ​​but I found it useful to get a general idea:

Aria Maestosa is an excellent application for managing projects midi, at least for those who seek a comprehensive software without too much complexity and carrying out their jobs well. To download Aria Maestosa, in all its versions, simply follow this link and click on that related to your operating system.

First, download the source code from the sourceforge downloads area or from SVN.
Aria is written in C++.

You will need to install Developer Tools/XCode.

A couple wx patches have been included in the /OSX directory - apply them to wxWidgets before building it for better results. 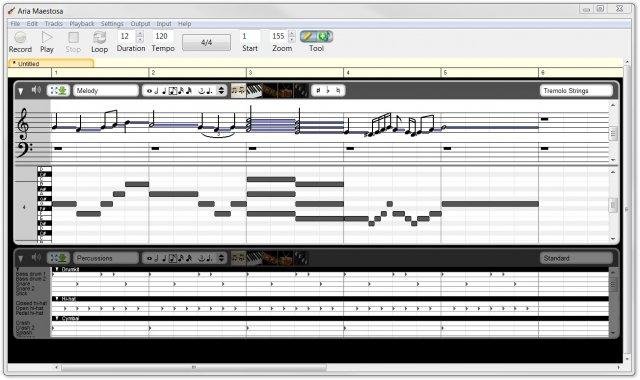 Make sure wx-config --libs points to the 3.x libs when run from a terminal. If your computer does not find wx-config, make sure /usr/local/bin is in your PATH (or pass WXCONFIG=/usr/local/bin/wx-config to scons - see explainations below).

You will need Python, Alsa (including -dev packages if your distro uses them), wxGTK (wxWidgets), OpenGL (if you wish to use the OpenGL renderer, and also get -dev packages if any), gcc/g++ (build-essential in Ubuntu). For midi playback, you will need a softsynth like Fluidsynth or Timidity plus a soundbank (more info below)

Installing wxWidgets : You can simply download wxWidgets 3.0 from your distribution's repositories. It needs OpenGL support enabled if you want to use the OpenGL renderer, and should be Unicode. Don't forget to install -dev packages if your distribution uses them.
If you want to build wxWidgets from source, you can use commands like (read the instructions that come with wxWidgets or wxWiki for more info):
cd wxGTK3.0.x mkdir gtk-build && cd gtk-build ./configure --with-opengl --enable-unicode make sudo make install

Make sure wx-config --libs points to the 3.0 libs when run from a terminal. If it does not, it is likely that your distribution's wxWidgets (in /usr/) is picked up before the one you built (in /usr/local/). To fix this, you can pass WXCONFIG=/usr/local/bin/wx-config to scons when building - more info below.

Install MinGW. You'll need Python if you wish to use the scons build system (and update your PATH env variable if you wish to invoke python from the terminal without using the full path).

Installing wxWidgets : Build using MinGW. You can use a command like :

Check the wxWidgets READMEs or the wxWiki for more information.

You are now ready to build Aria itself. All you need to do is type the scons command :

This will do a release build with default wxWidgets. Issue python scons/scons.py --help for a summary of all possible options, like to get a debug build or to use a different wxWidgets build.

You are now ready to build Aria itself. All you need to do is type the scons command :

This will do a release build with default wxWidgets. Issue python scons/scons.py --help for a summary of all possible options, like to get a debug build or to use a different wxWidgets build.

Adapt the paths in this command as needed. The scons file that comes with Aria assumes you are using wx 2.9.x built manually with mingw. Modifications to the scons file may be needed for other configs.

The SCONS file assumes wxWidgets 2.9.5 built as previously described. Using another version or build configuration of wxWidgets may require tweaking the SCONS file. 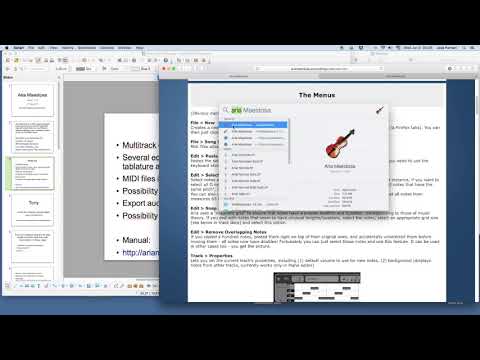 You can make a mac OS X app bundle with the following command:
python scons/scons.py install

If you do not already have one, you will need to install a softsynth like Fluidsynth or Timidity. See Installing a MIDI synthesizer on Linux for more information.

At this point, if you are happy with letting Aria live in this folder, you can simply run it with ./Aria

On a further note, you may also run script installMimeType.sh found under the /Freedesktop directory to register Aria Maestosa files associations using the freedesktop standard. This script will also install the .desktop file for Aria in /usr/share/ (this path is not configurable currently, sorry, edit the file if you want to install it somewhere else)

Copy the wxWidgets DLLs into the same directory as Aria so they are found.

If you have any question or issue, do not hesitate to contact me!