Your to-do list just got simpler, with help from Apple Remote Desktop. Whether ensuring that your client Mac computers are running the latest version of OS X or coordinating a companywide software upgrade, you’re just a few clicks away from “finished.” 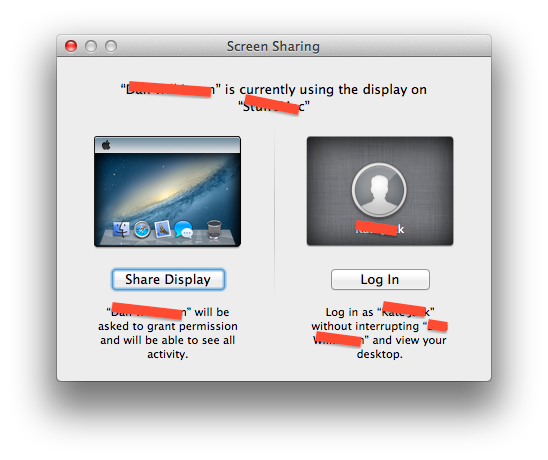 Apple Remote Desktop lets you install software programs and applications, and perform updates on an unlimited number of Mac computers in your network simultaneously. The only computer you actually have to touch is yours.

It gives you the freedom to schedule tasks without interrupting the user or requiring any interaction. Just initiate the process and Apple Remote Desktop does the rest, including restarting systems when required. Using Apple or third-party tools, you can create custom install packages that Apple Remote Desktop can copy and install onto your remote systems. You can even specify successive installations for multiple software packages — no waiting.

If your client Mac computers include more than a few laptops that spend a lot of time on the road, no problem. The AutoInstall feature lets you stage software for systems that are offline. Once the system is back on the network, the software is automatically copied and installed.

Power Copy lets you set the amount of network bandwidth the task may consume. It will also let you define user and group membership and permissions of the files on the remote computer. There is even an option to encrypt the data stream. And if Power Copy finds a duplicate copy of a file already on a system, it will alert you and give a variety of options.

The original release, which used the User Datagram Protocol (UDP) on port 3283, allowed remote computers (running Mac OS 8.1 or later) to be observed or controlled from a computer running macOS. It also allowed remote computers to be restarted or shutdown, to have their screens locked or unlocked, or be put to sleep or awakened, all remotely. Version 1 also included simple file transfer abilities that would allow administrators to install simple applications remotely, however to install applications that required the use of an installer the administrator would have to run the installer manually through the client system's interface.

Version 1.2 (released April 2, 2003) added a number of features that were designed to ease the administration of a large number of computers. Software could now be installed remotely on a number of machines simultaneously, without using the client system's interface. The startup disk on remote computers can also be changed, setting them to boot from a NetBoot server, a Network Install image, or a partition on their own drives. The client ARD software could also now be upgraded remotely to allow administrators to take advantage of new features without having to visit each individual computer.

Apple released a minor update on December 16, 2003 that brought ARD to 1.2.4. This update concentrated on security, performance and reliability.

On June 21, 2004 Apple announced Apple Remote Desktop 2 (released in July), which was designed to use the VNC protocol (with many private extensions) instead of Apple's original ARD protocol. This allows the ARD administration software to observe and control any computer running VNC-compatible server software (such as Windows and Unix systems) not just Macs and conversely allowing standard VNC viewing software to connect to any Mac with the ARD 2 software installed and VNC access enabled. This version also uses the Transmission Control Protocol (TCP) for most functions (on ports 5900 and 5988), which is designed to be more reliable than the UDP used in ARD 1.[2] Another significant addition to ARD 2 was the Task List, that allows remote tasks to be queued and monitored, reporting their status (such as Succeeded or Failed). This release also dropped support for older versions of the Mac OS, requiring 10.2.8 or higher.

On October 11, 2004 Apple released version 2.1 which improved on a number of existing features while adding the ability to view observed or controlled computers in full screen, the ability to see the displays of computers with more than one monitor and support for mouse right-click and scroll-wheels.[3]

On April 29, 2005 Apple released version 2.2 which added support for Mac OS X 10.4 along with several other bug-fixes and improvements to reliability.[4]

On April 11, 2006 Apple released version 3.0 which is now a Universal Binary and features improved software upgrade functionality, Spotlight searching, as well as increased throughput and encryption for file transfers, and Automator support. 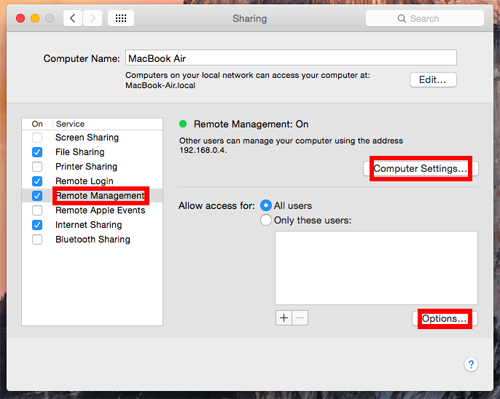 On August 20, 2009 Apple released version 3.3 which fixed many bugs and allowed function keys and key combinations to be sent to the remote computer instead of the local machine.[5]

On January 6, 2011 Apple released version 3.4 which provides compatibility with the Mac App Store.[6]

On January 27, 2015 Apple released version 3.8, which primarily added support for OS X 10.10, while also including various user interface improvements, a new icon, stability improvements and the ability to update the application using the Mac App Store, even if the application was not originally installed from that source. This version now requires OS X 10.9 or above.[9]

On February 21, 2017, Apple released version 3.9, which heightened communications security between local and remote computers (including a Preferences checkbox to allow communication with pre-3.9 clients), added support for the MacBook Pro TouchBar, addressed various stability issues, allowed the user to export and import an encrypted list of computers with user credentials, and debuted the ability to use an 'Assistance Cursor' to call attention to items for the remote user. This version now requires OS X/macOS 10.10.5 or later.[10]

Prior to version 3, ARD encrypted only passwords, mouse events and keystrokes; and not desktop graphics or file transfers. Apple therefore recommended that ARD traffic crossing a public network should be tunnelled through a VPN, to avoid the possibility of someone eavesdropping on ARD sessions.[11]

ARD 3.9 included as yet unspecified enhancements to communications security that made the native mode incompatible with previous-version clients. A Preferences checkbox was provided in the Apple Remote Desktop app to explicitly allow communications with older clients. ARD 3.9.2 made the use of this checkbox optional for seeing clients in the list.[10]

In November 2017, the United States International Trade Commission announced an investigation into allegations of patent infringement with regard to Apple's remote desktop technology. Aqua Connect, a company that builds remote desktop software, has claimed that Apple infringed on two of its patents. [12] 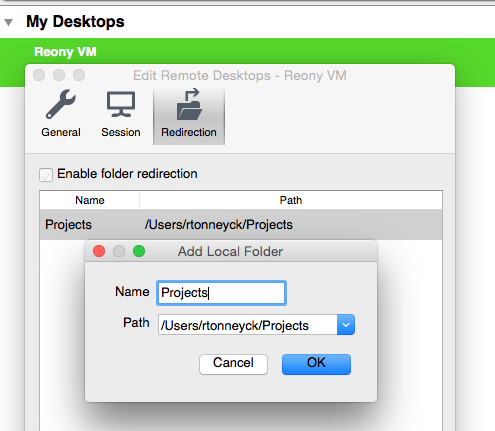 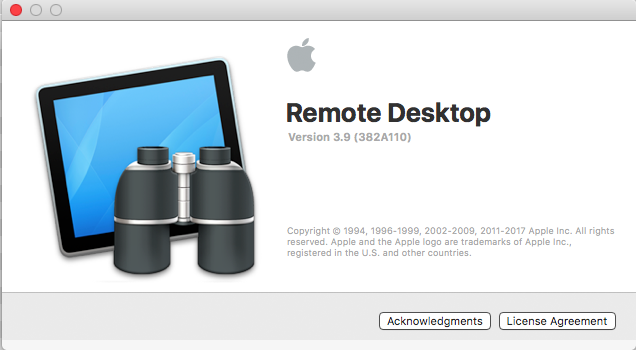